Home
Wide Format
Packaging and Labelling
Subscribe
Advertising
About Us
About Us
Awards
Contact Us
Commercial Headlines
Special Feature 24 October 2014
Old Printing Equipment enchants a new generation
It can be a long trek to east Scarborough, but well worth it if you’re looking to take a trip back in printing. East Scarborough—a former borough of Toronto—is where you’ll find Don Black Linecasting Service Ltd., an old-school printer’s dream where linotypes, Ludlows, and other ornate iron presses from a by-gone era rest in a threeroom warehouse. And there, shuffling around the shop, is 77-year-old Don Black himself. Looking for something in particular? He’s bound to have it. It’s quite likely that if anyone bought a letterpress machine in recent years, they bought it from Don Black. 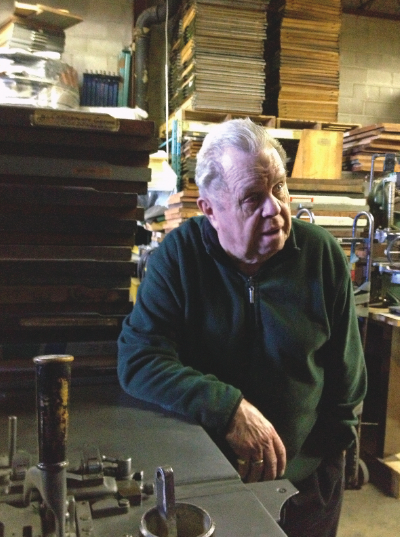 Black’s passion for hot type and
letterpress machines dates back to 1953—his first apprenticeship as a mechanic for the composing room at The Globe and Mail.But computers soon started to automate the printing industry. In 1964, the new punch-electronic tape brought in to operate linotype machines caused the longest printer strike in Toronto—one that affected composing room staff at The Globe and Mail, The Toronto Star and The Telegram. “The next day,” says Black, “the publishers and upper management were still able to put out a paper. That’s when I knew…they didn’t need us anymore.”

Black watched many of his colleagues depart from printing altogether, but he stuck to his passion, freelancing as a typesetter for local businesses, then buying and selling used printing equipment.In a twist of fate, Black acquired much of The Globe’s old Ludlows and linotypes that were being tossed out. Soon, he became the go-to source for everything hot type. With enough steady income, he opened Don Black Linecasting Services in 1974. Today, it’s a new generation that’s keeping traditional printing alive. “We have book arts people that are coming around looking for Vandercooks or tabletop platen presses that do 50 or 100 prints,” says Black. “They want it on special paper and they want certain typefaces and woodtypes. It’s all hands-on.”

Over the last five years, a series of printmaking workshops and studios have sprung up in North America—in places like Maryland, North Carolina, Florida and California—and they all know Black. One of his recent customers is a successful company in California that offers workshops on making personalized wedding invitations. In Toronto alone, OCAD University, Kozo Studio and Open Studio offer workshops in letterpress and bookbinding.

Snap + Tumble offers custom letterpress printing and design, as well as a tabletop letterpress workshop. Black’s newly hired office manager, Albert Kwon, is a case in point. After graduating from Carleton University in industrial design, Kwon wanted to try his hand at letterpress art. He enrolled in a series of workshops at Kozo Studio and, through word of mouth, landed a position at Black’s shop early last year.

Ironically, computers—the very technology that put Black out of a job 50 years ago—sparked the recent interest in Black’s inventory. Blogs and online forums on the art of letterpress often refer to Don Black Linecasting Service. Black’s current collection includes an 1893 Albion Press as well as antique iron tabletop platen presses, some dating back to the 1700s. He also holds one of Toronto’s only collections of international fonts, including Ukrainian, Russian, Chinese, Japanese, and Russian Cyrillic.

Some of Black’s 2,000 font types can be traced as far as Sheffield, England, from the Stephenson Blake foundry, the last active type foundry in Britain that opened in 1818 and folded in 2005. Just last year, Canadian media magnate, David Thomson, toured Black’s shop and left with “a large quantity of old metal engravings mounted on wood for an archive that he was setting up in the UK,” says  Black.

Although Black plans to leave the business to his son, Craig, he isn’t ready to let go just yet. A sentimentalist, Black has a story behind every machine or engraving. Last year, he received a phone call from the wife of a retired printer who was showing signs of early Alzheimer. Although the printer had sold most of his equipment, he, like Black, kept a personal collection of rare font types and accessories. “She didn’t want to see his collection end up in a scrapyard and get melted down,” says Black, “so she asked me to buy the rest of his stuff. She said ‘I know it will be in good hands.’”

Jennifer Lee is a freelance writer with a special interest in the art ofprintmaking. She can be reached atj86lee@ryerson.ca.

*This story is also featured here in our October 2014 issue.*

Tweet
(2) Comments Post a Comment
Comments:
Ron Evans
4 November 2014 at 15:06
Don, I\'ve been to your shop many times, brings back great memories. I worked for the Northern Miner under Bill Edwards. I was a lock-up man back then. One of the last linotypes operated by Jack Morrison, I believe ended up at the Science Centre. I will stop by in the near future.
Gbox Q
9 March 2015 at 07:00
hello,i just read your articular its simply amazing it just inspire me to visit you thankyou http://www.topmediabox.com/
Graphic Monthly Canada
The Printing Industry Authority
Current Issue